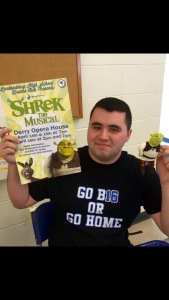 Shrek The Musical with my grandson, Daniel, as Shrek

These students showed how incredibly talented they are and how much they enjoyed their craft.

For those of you who don’t know who Shrek is, let me explain.

Shrek is an ogre who was sent away by his parents at the age of seven to live his life on a swamp in solitude. Most people are afraid of Shrek for he is not the most attractive or friendly creature and does not smell pleasant.

The costumes were made by parents and other volunteers who performed miracles as you can see by the transformation of Daniel, handsome of face, to this unattractive ogre with plenty of padding.

As a proud grandmother I was thrilled to see and hear my talented grandson doing what he loves to do, act, sing and dance. He has a beautiful, strong voice that filled the room and swelled my heart with pride. His acting was superb and he made me believe that he really was Shrek!

Lord Farquaad banishes all the misfits, fairy tale characters, from the land and sends them to the swamp where Shrek makes his home. These characters invade Shrek’s space which forces Shrek to fight back for his home and peace and quiet by asking Lord Farquaad to allow the misfits to go back home.

Lord Farquaad was in a costume with dummy legs while he knelt on his knees the whole performance just to make him look small. This was comical to see and brought the audience to hysterics.

Here Pinocchio and some of the other fairy tale characters plead for help from Shrek.

On his journey to the castle Shrek meets Donkey who becomes his constant but not always quiet companion. Donkey was a joy to behold with his antics and great sense of humor and timing. 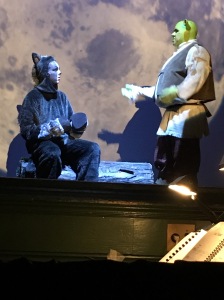 Three girls of varying ages played Fiona, who becomes Shrek’s love. They were all beautiful in their roles and sang like angels.

Once Shrek arrives at the castle, Lord Farquaad requests that Shrek find Princess Fiona and bring her back to the castle to marry him. Lord Farquaad must marry a princess in order to become the king of the land of Duloc. If Shrek can do this, then Lord Farquaad will let the misfits go back home and leave Shrek to his swamp in peace with his own deed.

Shrek agrees and goes in search of Fiona along with the help of Donkey. When they arrive at the tower where Fiona is kept imprisioned Shrek must get past the fiery dragon in order to rescue the fair Fiona. This dragon had a phenomenal voice like Christina Agulera. She blew the audience away by her talented pipes! 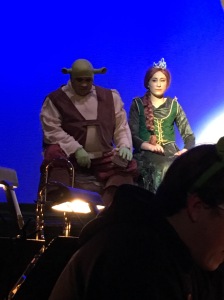 While they travel together Shrek and Fiona find that they have a lot more in common than they realize. Shrek now must decide if he can give up Fiona to Lord Farquaad for he is falling in love with her.

Shrek follows his heart when he sees that Fiona loves him too. Her secret is revealed at sundown when she becomes an ogre like Shrek. They are perfect for each other. A happy ending for them and a standing ovation for these outstanding actors in an unforgettable and entertaining play.

The ogre gets the girl and a kiss too! 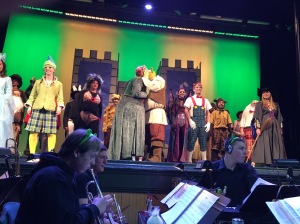 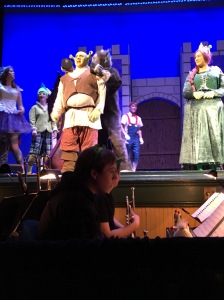 When the play ended I wanted to see it all over again. It was that good! Looking at these talented young men and women and hearing their fabulous voices one forgets that they are not professionals.

Well, I truly believe many of them will realize their dreams to become famous one day and appear on Broadway! I hope that I get to see them there!

I look forward to more wonderful shows in the future with my younger grandsons, ages, nine and eleven. This is the last play for my oldest grandson, Daniel, now 18, for he is a senior and will be going to college in the fall.

Congratulations to all the actors, director, stage help, parents and support staff who made this show such a terrific success. I cannot forget to mention the band that played all the songs in Shrek to perfection lead by their music/band teacher, Serge Beaulieu. They made the play full and rich with feeling by their beautiful renditions of the songs.

I must commend Londonderry for having a fabulous music program that encourages and produces such amazing talents in both the band and the drama departments. Children learn, grow, and develop into surprisingly confident and poised young adults under this exceptional group of creative teachers, and director, Andy Soucy.

I hope you enjoyed reading this post and viewing the beautiful photos compliments of my son, Chris, and professional photographer, Doug Rathburn.

I got Shrek to pose for a picture with me!

I tried to include a video of Dan singing but couldn’t download it here. Just found out that the group doesn’t allow the video to be shared. Sorry. Sometime in the future I will feature my grandson singing here.

Thanks for stopping by.

17 Responses to Shrek, The Musical by Londonderry High School!