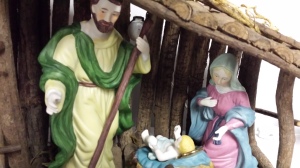 The True Meaning of Christmas

Angela put down the phone and continued making dinner, mac and cheese, chicken fingers and mixed veggies. She wanted to make sure the kids got their veggies too. She heard the sound of feet coming up behind her and looked down to see the sweet faces of Brenda and Andrew and close behind was Clarinda. They were looking at the food with such longing that she told them to go wash their hands and faces and come sit down to eat. They hurried along to the bathroom that had been pointed out to them earlier and came back and sat down before Angela could turn back around with the food in hand.

The children were sitting down with napkins tucked under their chins and forks in hand waiting expectantly for their much coveted dinner. Angela placed a plate full of food in front of each child and stepped back. Clarinda jumped up and ran over to her sister’s side and began cutting up her chicken and then moved over to Andrew’s and did the same for him. Angela watched in awe as this young girl acted as if she was their mother. Once she had taken care of her sibling’s needs she sat down and began to eat her own food.

The children were so hungry that they ate too fast at first and began to choke. Clarinda jumped up once again to aid her siblings and tell them to slow down and chew their food carefully. Angela sat at the other end of the table and watched as the children finished every last morsel in their dishes and drank every drop of their milk.

Angela asked them, “Would you like more food or milk?”

“No, we are fine, thank you, Mrs. Antonelli. It was very good.” Clarinda turned to her siblings and said, “Say ‘thank you’ to Mrs. Antonelli, Brenda and Andrew.”

“Thank you,” replied Andrew who smiled showing some chicken still stuck in his teeth.

Angela had to keep herself busy and grabbed the plates off the table to prevent her eyes from filling and spilling over in front of the children. She mumbled, “You are welcome, children.”

Leonard had walked in quietly and had witnessed this unbeknownst to his wife and suddenly cleared his throat to get her attention. She rushed over to hug him and then introduced him to the children. They stood up and looked at him not sure what to do or say.

Clarinda broke the silence by saying, “Hello, Mr. Antonelli, nice to meet you. Thank you for letting us stay in your home.” She walked over to Leonard and extended her small hand in greeting.

Leonard was at a loss for words and just reached over and shook Clarinda’s hand and smiled at her as she looked up at him with the most beautiful blue eyes he had ever seen besides his wife’s, that is.

Clarinda brought her brother and sister in turn over to Mr. Antonelli and they both shook his hand too. Leonard just wiped his eyes and smiled and said, “It is a real pleasure to meet all of you too. I hope you enjoy staying with us as much as I am sure we will enjoy you being here.”

Angela finished up the dishes and told Leonard that she was going to put the children to bed upstairs in the three guest rooms. They had five bedrooms and four bathrooms which they had hoped one day to fill. Now at least they would be using three of them. The children followed Angela up the long winding staircase to begin their unexpected stay at this big strange house. Their eyes got bigger as they took in the long staircase and all the beautiful lights above their heads. As they climbed the stairs they noticed that there were sconces all along the wall to light the way.

When the children were situated in their rooms Clarinda requested that they all stay in the same room since there were two beds in each spacious room which was more than enough for the three of them. She didn’t want to be separated from her siblings and they would not do well too far away from her either.  Once Brenda’s head hit the pillow she was off as well as Andrew. It was the first time they had full stomachs at bedtime. Once Clarinda was sure her siblings were asleep she allowed herself to snuggle down under the warm, soft comforter and she, too, fell fast asleep.

Before retiring for bed Angela peeked in and tucked them all in and gave each child a peck on the cheek. She shut off the light but not before looking fondly one more time at each sweet face in the beds. She felt such a longing and a tightness in her chest that she thought she was having a heart attack. She realized that it was pure joy at finally having children in her home, something that she had always wanted.

I  hope you are enjoying this short story which seems more like a long short story by now. Lol! The spirit of Christmas is all around us if we only open our eyes and ears to it. Please give to those in need this Christmas. Spread some joy and smiles – they are contagious and produce a warm glow in every direction! I have opened my heart and my checkbook in hopes that I will make a difference in someone’s life.

Thank you for stopping by!

Blessings of the season to you and yours!