Thank you, Sally Georgina Cronin, for tagging me to take part in this Three Quotes in Three Days! Sally is one lovely, creative and multi-talented lady. Please check out her wonderful blog. I hope you don’t mind, Sally, but I will put all my quotes in one (basket) blog. 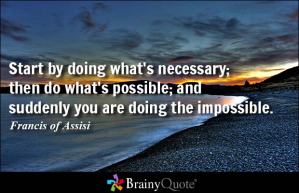 This quote really touches home with me. I never thought I was capable of living my dream of being an author. Each year went by and I did nothing but think about it. This went on for many years until I decided to do something about it and publish my books. I did what was necessary then succeeded beyond my wildest dreams. It was uplifting and fulfilling to do what I dreamed of doing for so many years! It is never too late to live your dream.

Saint Francis of Assisi was an Italian Catholic friar and preacher. He founded the men’s Order of Friars Minor, the women’s Order of St. Clare, and the Third Order of Saint Francis for men and women not able to live the lives of itinerant preachers, followed by the early members of the Order of Friars Minor, or the monastic lives of the Poor Clares. Francis is one of the most venerated religious figures in history.

St. Francis did the impossible and succeeded! He followed God’s message of building a church in Assisi and giving up all his worldly possessions in order to follow God’s word.  I pray that I can be as dedicated to God as St. Francis was. I was fortunate enough to visit the church in Assisi and felt profoundly moved when I went inside. I will never forget the feeling of being close to God!

This is a quote by a courageous woman, Helen Keller. As per Wikimedia states:

Helen Adams Keller was an American author, political activist, and lecturer. She was the first deaf/blind person to earn a bachelor of arts degree. The story of how Keller’s teacher, Anne Sullivan, broke through the isolation imposed by a near complete lack of language, allowing the girl to blossom as she learned to communicate, has become widely known through the dramatic depictions of the play and film The Miracle Worker. Her birthplace in West Tuscumbia, Alabama is now a museum and sponsors an annual “Helen Keller Day”. Her birthday on June 27 is commemorated as Helen Keller Day in the U.S. state of Pennsylvania and was authorized at the federal level by presidential proclamation by President Jimmy Carter in 1980, the 100th anniversary of her birth.

She was an amazing person like no other in her time or even of today. She could not use her senses but instead chose to use her heart! Surely God led her forward in everything she did. 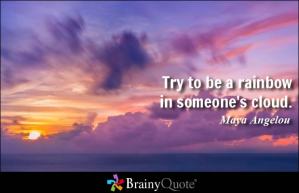 This is a lovely quote by famous poet, Maya Angelou. She has since passed this world for a better place next to God.

Maya Angelou was an American author, poet, dancer, actress, and singer. She published seven autobiographies, three books of essays, and several books of poetry, and was credited with a list of plays, movies, and television shows spanning over 50 years. She received dozens of awards and more than 50 honorary degrees. Angelou is best known for her series of seven autobiographies, which focus on her childhood and early adult experiences. The first, I Know Why the Caged Bird Sings, tells of her life up to the age of 17 and brought her international recognition and acclaim.

Maya was eloquent and elegant all at the same time. Her poetry was favored by presidents at Inaugural ceremonies. She will be missed for her wisdom and sense of wit in her extraordinary work.

These quotes are incredible and only make me want to be better than I am. They are words to live by and be inspired by. For whom among us would not want to be just a little like these blessed people.

1. Thank the person who tagged you.

2. List three quotes and inspire readers over three days or all at once.

I hope you feel as inspired as I do by these quotes. Thank you for stopping by! It is always lovely to see you!

8 Responses to Three Quotes for the Day Blog Tag!