Thank you, Charles, for coming today. Please take it from here.

1. When did you know that you wanted to be an author?

I’ve always liked telling stories since I was a kid, but the author idea and passion came about in high school.  I was fifteen and had spent most of my life thinking I’d be a zoologist.  My queasiness around blood and total lack of ability with chemistry stopped that, so I was thinking about what I really loved to do.  I began reading ‘The Books of Lost Swords’ by Fred Saberhagen and I became obsessed with the idea of creating a world.  I couldn’t stop myself from designing creatures, characters, and outlining stories.  I still haven’t stopped even all these years later.

jjspina: That’s incredible, Charles. You were meant to be a storyteller. Your books are creative.

2. What process do you need in order to write?

As I just mentioned, I’m a very big planner.  The start of my process is creating character bios to give me an idea of who they are, what they want, and where they are aiming to go.  I can get a lot of subplots out this part of the planning, which leads to do a general write-up of the overall story and creating any special items and locations.  Since most of my books take place in the world of Windemere, I try to make connections between the various adventures.  Once this is done, I make an outline and get into the writing, which inevitably changes the outline because characters rarely do what I expect.

jjspina: Being an author myself, I know exactly what you mean about the characters taking over a story.

3. What projects are you currently working on?

My current projects are a long series and a release for next summer.  War of Nytefall is my newest long running series that focuses on the vampires of Windemere.  My aim is to publish 2 more volumes this year and another 3 next year like I did with my first series, Legends of Windemere.  Everything has already been outlined and set up, which helps me dive right into the writing side of things.  The release for next summer is going to be the third installment of a dystopian action adventure that I work on from time to time.  The Bedlam Series is a wacky, Rated-R romp where I just cut loose on the crazy heroes, crazier villains, and designing degenerate aspects of a United States that has fallen into ruin.  The 2019 release will be called Derailing Bedlam and sees the violent, fun-loving heroes hired to protect the first cross-country train to be used since the societal collapse twelve years ago.

jjspina: You have quite a project outlined for yourself, Charles. Good luck in completing all books.

4. What hobbies do you have when you are not writing?

I have to admit that I’m fairly lazy when I’m not writing.  I read books, which has been manga for the most part lately.  Sometimes I play a video game or relax with a TV show.  One reason is that I tend to give my ‘free’ time to my son and do whatever he wants.  That can range from water balloon baseball to the playground to a trip to the zoo.  Not sure if parenting can be considered part hobby and part job here.

jjspina: Being a parent is a full-time job but it sounds like you make it fun with all the activities you share with your son.

5. What is your target audience for your book?

Anybody who wants to relax and escape reality with a fun adventure.  My stories do aim more for the fantasy audience, but I’d like to think anyone can get into them.  Within reason though because there’s probably too much violence and sexual innuendo for kids.  Probably best to start at fifteen-year-olds, but it’s up to the parents.

jjspina: I guess it’s best to leave it up to parents to make that decision.

6. Please share your books with us and a synopsis of each.

This is my first series, which I finished last December and sets the groundwork for all of my Windemere adventures.  It follows a young warrior named Luke Callindor, who is determined to be a hero like his ancestors.  What begins as him lying to get a job protecting a royal heir turns into a tale of prophecy when Luke joins with five other champions to stop an ancient evil from returning.  Along battling evil agents and challenging deadly temples, they are forced to mature and realize that being a hero can be more of a curse than a gift.

jjspina: I enjoyed this book and look forward to reading the next book in the series.

Quest of the Brokenhearted is 99 cents until August 1st!

Quest of the Brokenhearted

A spinoff of Legends of Windemere, this follows a supporting character who has been left with a battered spirit and a broken heart.  Feeling like she has nothing left to lose, she heads into Lacarsis, the monster-filled City of Evil.  Accepting a challenge that has claimed thousands of lives, she will either find a new reason to live or die. 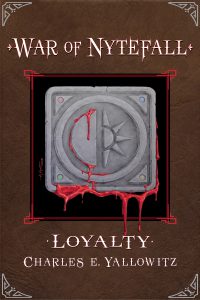 Having been captured by Sun Priests, a vampiric thief named Clyde is about to be executed when the Great Cataclysm hits.  The spells designed to tear him apart go haywire and the city-sized temple falls into the earth where he stays for 50 years.  With vampire-kind on the verge of extinction, his old partner Mab frees him from his prison in the hopes of turning the war in their people’s favor.  To her surprise, Clyde comes out of the ground different.  No longer weakened by the sun, he is stronger, faster, and more bloodthirsty than any vampire before him.  Yet, there are more enemies out there than hunters and Sun Priests.  Some dangers are closer to home than the cocky thief can imagine.  What begins as a fight for survival turns into a fang-filled civil war between the old-world monsters and Clyde’s newly dubbed Dawn Fangs?

7. What advice would you give prospective authors?

Write what you love because the audience can feel your energy through your words.  If you enjoy writing it and put your heart into it then the reader will be drawn in.

8. If you could travel anywhere in the world, where would you go?

I’ve never had the money to travel, so I have a long list.  I really want to go to Greece one day and see the ruins.  Greek mythology has inspired a lot of my ideas, so it would be nice to go to the source.  I’d also like to go on an African safari, but with cameras instead of guns.  Just seeing those animals in the wild would be awe-inspiring.

jjspina: I agree about Greece. It is fascinating, especially the historical facets of it. Visiting Africa would also be an unforgettable experience.

9. If you could have one wish, what would it be?

This is a really tough one, but I’m going to keep it on me instead of doing the world peace level wishes.  I would wish to always make enough money with my books.  Not be rich, but to afford rent, food, water, and the other essentials.  This would allow me to keep writing and not worry about money.  It isn’t a glamorous or incredible wish and it could probably stop my books from rising higher than mid-level popular, but I’m looking more for contentment than wealth and fame these days.

jjspina: I guess all of us authors have the same wish – to make a living out of our books – doing what we love to do.

10. What would you do if you were not a writer?

Assuming I never had the desire to write, I’d probably have tried to find a way to work with animals.  I’d have to get over that blood issue and work harder on chemistry, but I’d have gone back onto that path.  Maybe work at a pet store and make my way up the corporate ladder?  Then again, I could do the same thing in a book store.  Guess I’m revealing that I didn’t have a solid Plan B here.

jjspina: You do have a sense of humor about it though, Charles.

Quest of the Brokenhearted– https://www.amazon.com/dp/B07F5V3CT5/

Charles Yallowitz was born and raised on Long Island, NY, but he has spent most of his life wandering his own imagination in a blissful haze. Occasionally, he would return from this world for the necessities such as food, showers, and Saturday morning cartoons. One day he returned from his imagination and decided he would share his stories with the world. After his wife decided that she was tired of hearing the same stories repeatedly, she convinced him that it would make more sense to follow his dream of being a fantasy author. So, locked within the house under orders to shut up and get to work, Charles brings you Legends of Windemere. He looks forward to sharing all of his stories with you, and his wife is happy he finally has someone else to play with.

Thank you, Charles, for coming today. It was a pleasure to learn more about you and your fascinating books.

Here is my review of your book, Beginning of a Hero, Legends of Windemere Book 1 from Amazon.

blockbuster of a start to this fantasy series!

Beginning of a Hero is a fascinating tale of magic, mystery, heroism, good against evil, and gods against mortals that kept this reader enchanted. The author has created an eclectic collection of unforgettable and endearing characters that carry the story straight to the reader’s heart.

This book has all the makings for a future movie. Mr. Yallowitz is a talented, creative writer of fantasy genre who may one day rival the best. I look forward to more books in this series to follow the heroic adventures of Luke Callindor and his cohorts.

Thank you, readers, for stopping by today to read about this talented author, Charles Yallowitz. I hope you will peruse Charles’ blog and website and check out his eclectic collection of books on Amazon.

REMEMBER: READING GIVES YOU WINGS TO FLY! SOAR WITH JEMSBOOKS.COM ALL YEAR THROUGH! HAPPY READING!

READING IS GOOD FOR YOUR HEALTH!