Legends of Windemere, The Mercenary Prince 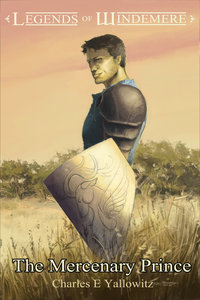 Behind the Legends of Windemere

Thank you to Janice for letting me write a guest blog and help promote the latest volume of my sword & sorcery series, Legends of Windemere. I currently released the 9th book of a 15 book series, which means I’m beyond the halfway mark. So, where did it all come from?
First of all, I’m going to explain where the name ‘Windemere’ came from. There are places with this name or variations on it like Windmere or Windermere. I didn’t know any of these places existed until after I’d published the first book. The name came about when I was in college and walking along the shore of Lake Ontario. I was struggling to come up with a name for my new fantasy world and was letting my mind wander. Time wasn’t really on my side since I wanted to write an excerpt of my novel for a creative writing class. There was a lot of wind that day and that caught my attention. After playing around with different combinations, I landed on ‘Windemere’ and it stuck.
So where did the overall story come from? I was big into Dungeons & Dragons, a tabletop role-playing game, in high school and that carried over to college. While my earlier years were about goofing off and doing stupid stuff with characters, I had to take it a bit more seriously in college to stick with the games. It was about characters and story now, which kicked off with the creation of Luke Callindor. Though he was only Luke at first and the surname came out of nowhere when the guy running the game said I needed one. You can see a trend of me having to think on my feet at the final hour.
So I asked if I could be a scribe for the game since D&D has a history of campaigns turning into novels. Everyone agreed and I took notes after every session, which soon became a large notebook of monsters, characters, places, and magical artifacts. It wasn’t easy because I couldn’t do much in the way of foreshadowing since I was still a player. The guy running the game knew what was going on, so I had to guess or decide on my own path for the books. Still I got a lot out of the sessions until the game collapsed around what would end up being the start of Book 10. Not that Books 8 and 9 existed in the game or even the plot of Books 6 and 7.
You see, I quickly learned that a game and a book operate entirely differently. So the story deviated and gained characters who were never in the game. Love interests appeared along with villains who had depth because neither of those came up. You can’t really have the game runner standing there acting out the bad guys because then the players would know the plan. There was also the issue of rolling dice, which meant luck was part of the action and that doesn’t fly in a book. You need stuff to happen and bizarre mistakes are seen as terrible writing. It doesn’t matter if a player rolled poorly and his halfling thief picked his nose instead of a pocket. That is more of an origin story than something that goes into the finished novel. Not to say I didn’t keep some of the more exciting dice roll events like wild stunts working out to a point where you wish you could see them on a big screen TV.
That’s really it for the origin of Legends of Windemere aside from various mythologies, TV shows, animes, movies, and other things poking some influence into my world. Yet, this series isn’t the end of the story for Windemere even when that final book is published. This one Dungeons & Dragons game kicked off a chain of events that led to me creating nearly 35 stories that will take place in this world. Some of these ideas came from other games while others were inspired by something else or even came out of nowhere. Never throwing ideas out, I’m always merging and reworking what I have in mind. It used to be multiple worlds, but I found that I kept returning to Windemere and found spots for everything to be combined into one giant mythos.

Windemere has a lot to show the world and I now consider it to be an evolving character that appears throughout everything. It is amazing how it all stems from that one game in 1998, but one never knows what will be the catalyst for creativity.

Thank you, Charles, for this fascinating post about the makings of your incredible series. I wish you much success in 2016!

Thank you, readers, for stopping by.

Janice is an multi-award-winning author with 39 books: 19 children's books for PS-Gr 4, 12 middle-grade/preteen, two young adult books, written under Janice Spina, and 5 novels, and a short story collection written under J.E. Spina. She is also a writer of poetry, blogger, avid reader, reviewer and a copy editor. Janice has always loved writing and started very young writing poetry, then stories. Her books have received 31 Book Awards and a few finalists awards. All Janice's books are available on Amazon.com, Kindle, B&N and other online book sites. One of her sports' poems was published in The Lawrence Eagle Tribune in October of 2008. She is currently working on book 2 of a YA fantasy series. There will be six books in all in this series. She hopes to work on a series of four books in a crime/mystery genre that will be offsprings of her thriller, Hunting Mariah. There are books in the works about an angel and another about a dog for ages 17+. Her hobbies are crocheting, walking to keep fit, hula hooping, tap dancing, going to the movies with her husband, and spending time with her five grandchildren. Janice loves to hear from readers and appreciates reviews. Sign up on her blog http://jemsbooks.blog for a copy of her newsletters under Contact Me. She lives in New Hampshire with her husband who is her illustrator and cover creator.
View all posts by jjspina →
This entry was posted in action, adventure, fantasy, Guest Posts, new book, Writing, book reviews and publishing, poetry, children's books, YA and novels and tagged Action, Adventure, Amazon, Author, casters, champions, chaos elves, dragons, dwarves, elves, epic fantasy, fantasy, fantasy series, Fizzle, friendship, gnomes, high fantasy, Legends of Windemere, Luke Callindor, magic, new book, Reading. Bookmark the permalink.

Writing - Loving What I Do and Doing What I Love!

THE CHRONICLES OF HISTORY