A Magical Trip to Disney!

Where else but in Disney World (or Disneyland) can you feel and see the magic Walt Disney has envisioned.  These two places are where everyone can feel like a kid again.

I recently traveled to Florida to visit Disney World with my son, daughter-in-law and three grandsons and their great aunt.  My oldest grandson was singing with his high school choir and band at Downtown Disney.  He was fantastic as always.  He is a very talented singer and actor and he is only in high school.  Watch out world he will be famous one day!  You can tell how proud I am of him and my two younger grandsons.  Each one of them is special in his own way.  I love them all very much.

I have been to Disney World a few times and never went on the train.  I just had to go on it this time in case I don’t get back again.  It was a fun trip and we got to see some of the back sides of rides and the park. 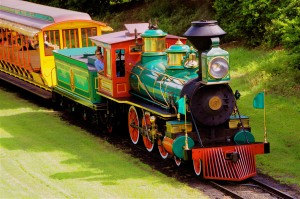 Everywhere we looked we saw all kinds of flowers and plants arranged in the shapes or topiaries of Disney characters and other creatures. 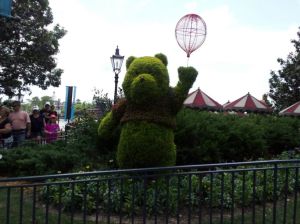 Even Downtown Disney was beautiful with all the displays of flowers everywhere you looked.  There was even a hot air balloon ride.  I didn’t venture up on it though. 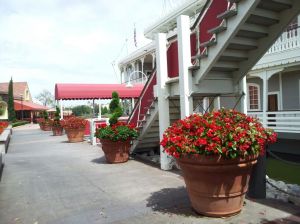 Here is a photo of my three handsome grandsons after the Luau at the Polynesian.  They had a great time!  Who doesn’t love to see the hula dancers and fire dancer?! 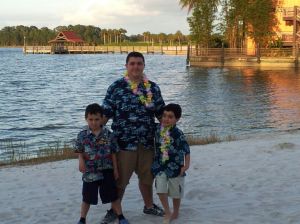 We went to a few character breakfasts and dinners where the characters are in full swing.  The boys just loved visiting with Mickey, Minnie, Goofy, Pluto, Donald, Daisy, et el.  They posed endlessly with all of them and of course had their autograph books with them.  Bless all the people who pose as the characters for their abundance of energy and enthusiasm to be with hundreds of children and adults every day.  My favorite was Minnie! 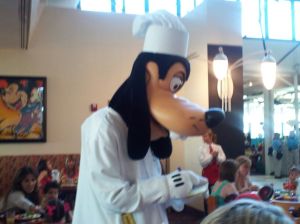 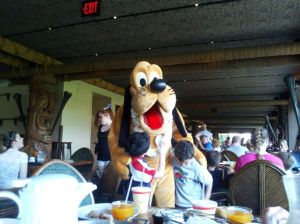 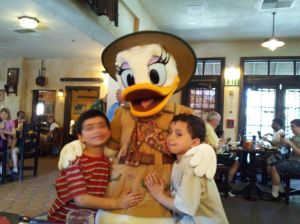 You can see the joy on their little faces as they meet and greet each character, some twice.  These characters wear different costumes depending upon which park they reside for pictures.  My grandsons didn’t seem to mind seeing the characters over and over again and neither did I.

Fantasy Land has been extensively updated and some of it is still under construction.  It is expected to be completely renovated by November 2013.  I loved the Beauty and the Beast Castle where we had dinner the first night to celebrate my son’s birthday.  It was quite a spectacular place just like in the movie.  We were escorted in by a woman dressed for the part carrying a lighted candelabra which she handed to my youngest grandson.  He was just thrilled!  She told him to follow her and he was responsible to lead our group to our table.  During dinner the Beast makes a grand entrance with much hoopla and music and clapping.  He takes a bow and disappears into an alcove for picture taking.  Quite a dashing beast!  But alas, Beauty did not appear much to our chagrin.

Hollywood Studios is another magical part of Disney World.  We did the Movie Ride and Back Lot Tour.   I stayed far away from the Tower of Terror!!  Just the idea of falling 13 stories frightens me to death!  But we can’t forget the Indiana Jones Spectacular.  Even though I have seen it many times I was still in awe at all the stunts.  It did not disappoint. 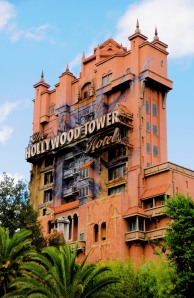 We had dinner at the Brown Derby in Hollywood Studios which was quite a treat!  After dinner we stopped in to see the Fantasmic Show which is all about Mickey and his friends with lasers and film on water.   Amazing show only Disney could do!!  It was phantasmagorical! 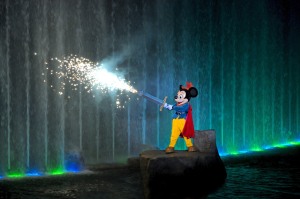 Another unbelievable show in Hollywood studios for kids of all ages is the extravaganza, Beauty and the Beast.  I just loved this show.  I took two videos but only one came out but it was too large to download here.  I snapped as many pictures as I could.  It was mesmerizing. 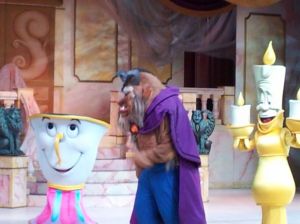 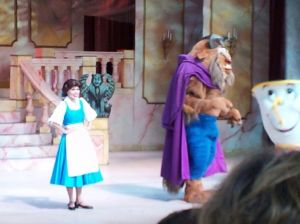 Scenes of Epcot and the Lands.  I never get tired of going to Epcot, since there is plenty to see, do and eat.  Where else can you can travel all over the world in one day. 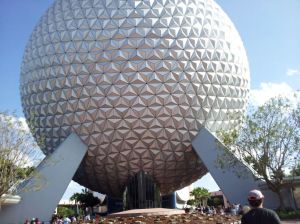 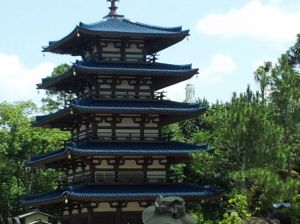 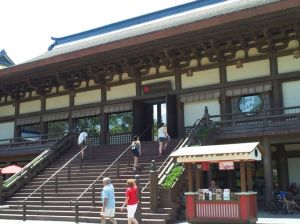 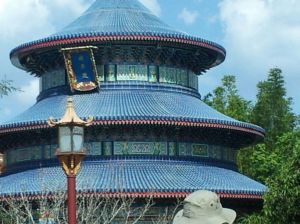 We had a delicious fish dinner in Epcot at the Coral Reef Restaurant where we sat right next to the gigantic fish tank.  I snapped these photos of the fish, sharks and turtles that passed by me while we ate.  It was an unbelievable experience. 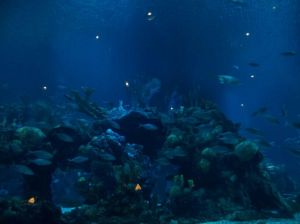 Epcot had amazing fireworks at the Lands over the water.  All the countries take part as they light up their structures individually.  Words can’t describe the beauty.  Check out the pictures compliments of Disney. 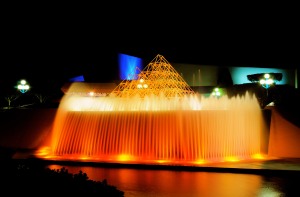 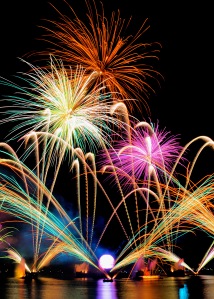 The majority of these pictures (believe it or not) I took on my Android phone.  They came out great!  All the evening pictures of the fireworks and light displays are the compliments of the CD of the Disney Photo Pass which my daughter-in-law let me borrow.  They are incredible.

We went on a pirate boat ride where all the kids dress up as pirates and we watched the Magic Kingdom fireworks.  Quite a thrill to see it from the water side of the park!  The castle lights up and changes colors.  The pictures again compliments of Disney tell it all.  Enjoy. 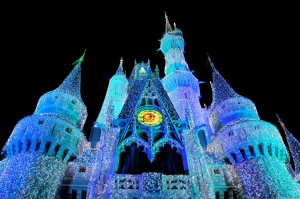 We had a good time in Animal Kingdom taking the Safari ride and catching many animals before they took their naps.  I snapped this gorilla who seemed unfazed by all the attention he was getting.  Other animals pictures compliments of Disney.  God Bless Disney!

I hope you enjoyed my magical trip to Disney.  Maybe one day you will venture down to Disney World or Disneyland and have your own magical adventure.

1 Response to A Magical Trip to Disney!

Author of suspense novels Sketch, Justice For Belle, Search For Maylee, Aggravated Momentum, and a medley of short stories.

Life in a flash - a weekly writing blog